Secure neighborhoods and a spirit of goodwill are important to Immanuel. They are non-negotiable components of the family- friendly environment Immanuel personnel work hard to create in its successful line of senior-living communities in eastern Nebraska. So when it came time to build a new community in Lincoln’s Williamsburg Village, the ministry’s leaders knew just what they wanted. Immanuel needed more capacity at its Williamsburg senior-living campus known as The Landing for seniors who require skilled nursing and long-term care. In turn, Tabitha was looking for a way to expand its successful Tabitha Residence model to meet the ever-growing demands of the Lincoln community. A decision was reached to build Harbor House as a sister facility to Cove House, alongside a picturesque pond. The goal was to maintain as much tranquility as possible during the construction process — a daunting task. It was a major concern for Rhonda Distefano, an experienced contractor who joined Immanuel five years ago as vice president of construction, facilities management and environmental services. She started vetting local contractors with this in mind. Based in Omaha, Immanuel works with Lincoln-based Tabitha. Both are nonprofits that provide state-of-the-art services for the region’s aging population. It didn’t take long for Distefano and her colleagues at Immanuel to choose a builder that could best get them where they wanted to go. Hampton Enterprises stood out among the six companies interviewed because of its stability and long-term presence in Lincoln that have earned it a solid reputation and a valuable network of contacts. Hampton went above and beyond by proving itself a good neighbor. Since its home office is located about a quarter-mile away from the Harbor House site at 6100 S. 34th St., it offered its own front yard as the main staging area for the project. That sealed the deal. “The main thing was the site logistics,” Distefano said. “It was a terribly tough site. We have more than 100 residents living next door on a fairly busy street. From Day One, that was our main concern. How do we do this and not impact our residents’ safety or disturb their lifestyle? In the end, that’s probably one of the main reasons we selected Hampton—because they came up with a unique approach and they were willing to keep the staging area on their property so we could maintain our mission and our quality.”

"Even on small things, they [Hampton] were right on top of it when we needed them to be," said Rhonda Distefano, Vice President of Construction, Facilities Management, and Environmental Services at Immanuel Communities.

From September 2016, when construction commenced, through its completion in October 2017, Hampton dealt with the deliveries, mud and daily disruptions, saving untold hassle for the residents and Tabitha’s nursing staff at the construction site. Hampton delivered a quality finished product, on time and under budget. To match Tabitha Residence Cove House was a great opportunity for Hampton, because thanks to the management of Tabitha’s nursing team, it carries a five-star quality rating — the highest overall score possible from the Centers for Medicaid and Medicare. Harbor House has 15 resident rooms — two which can serve as companion rooms or as a suite for one resident. At 12,500 square feet, Harbor House is slightly larger than Cove House because it includes a larger rehabilitation room and a convenient attached garage. In the final days of almost any large building project, there are unforeseen questions that need to be dealt with. Distefano said the Hampton team took care of all issues immediately. Residents moved into their new quarters in mid-October, just as expected. “Even on small things, they were right on top of it when we needed them to be,” Distefano said. The new community is a smash hit. “Tabitha’s Harbor House is a place that anyone would be proud to call home,” said Tabitha Vice President, Strategic Planning Joyce Ebmeier, who was instrumental in introducing this innovative approach to senior living in Nebraska. “Harbor House residents enjoy hosting their families and friends and love the inviting light and airy surroundings. They enjoy all the comforts of home, and Hampton’s hallmark quality and attention to detail make the house not only beautiful inside and out but most importantly safe and accessible. This plays a key role in providing residents the ability to direct their own care and lifestyle — and remain as independent as possible.” With more than 30 years in the construction business, Distefano was well acquainted with Joe Hampton, and knew his company had sold the site to Tabitha decades ago, before Immanuel acquired it. She was honored that Hampton’s founder got to observe this project from a unique perspective — as a resident at The Landing, before he passed away in January. She counted on getting a quality product on time and within budget, and she got it. But sometimes the best benefits of doing business with Hampton are a little harder to quantify. “They’re very nice people,” she said. “That doesn’t sound like much, but in today’s world, sometimes it’s hard to find that.” 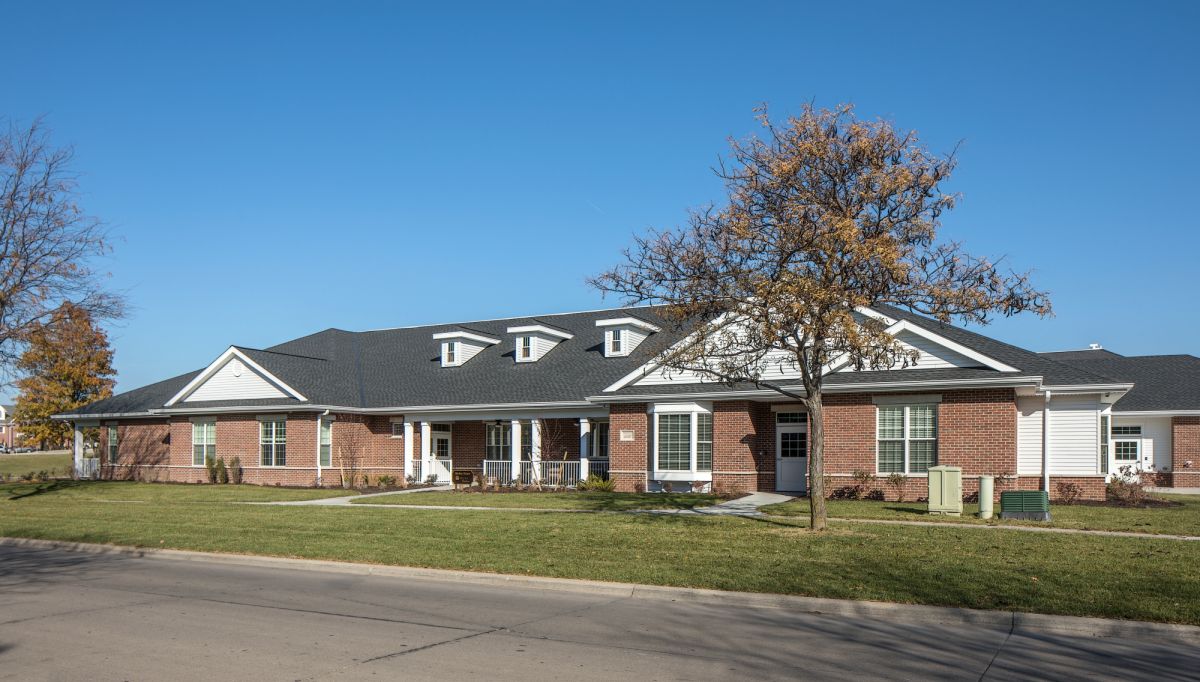