Hampton, Alivation take it to the next level

Alivation wanted to go to the next level. But it needed help getting there.

Formerly known as Premier Psychiatric Group, the Lincoln-based company already had a national reputation for its work in behavioral health. It had a modern, beautifully landscaped brick and stone structure in a peaceful cottonwood grove at 8550 Cuthills Circle, and the 59 dedicated team members who worked there. Focused on transforming patient care, the leadership team knew it was necessary to expand beyond brain and behavioral health. So in January 2017, they decided to go for it — and they set aggressive goals.

The vision was to provide a unique, team-based approach driven by some of the foremost professionals in the health care industry. They needed to broaden their offerings. 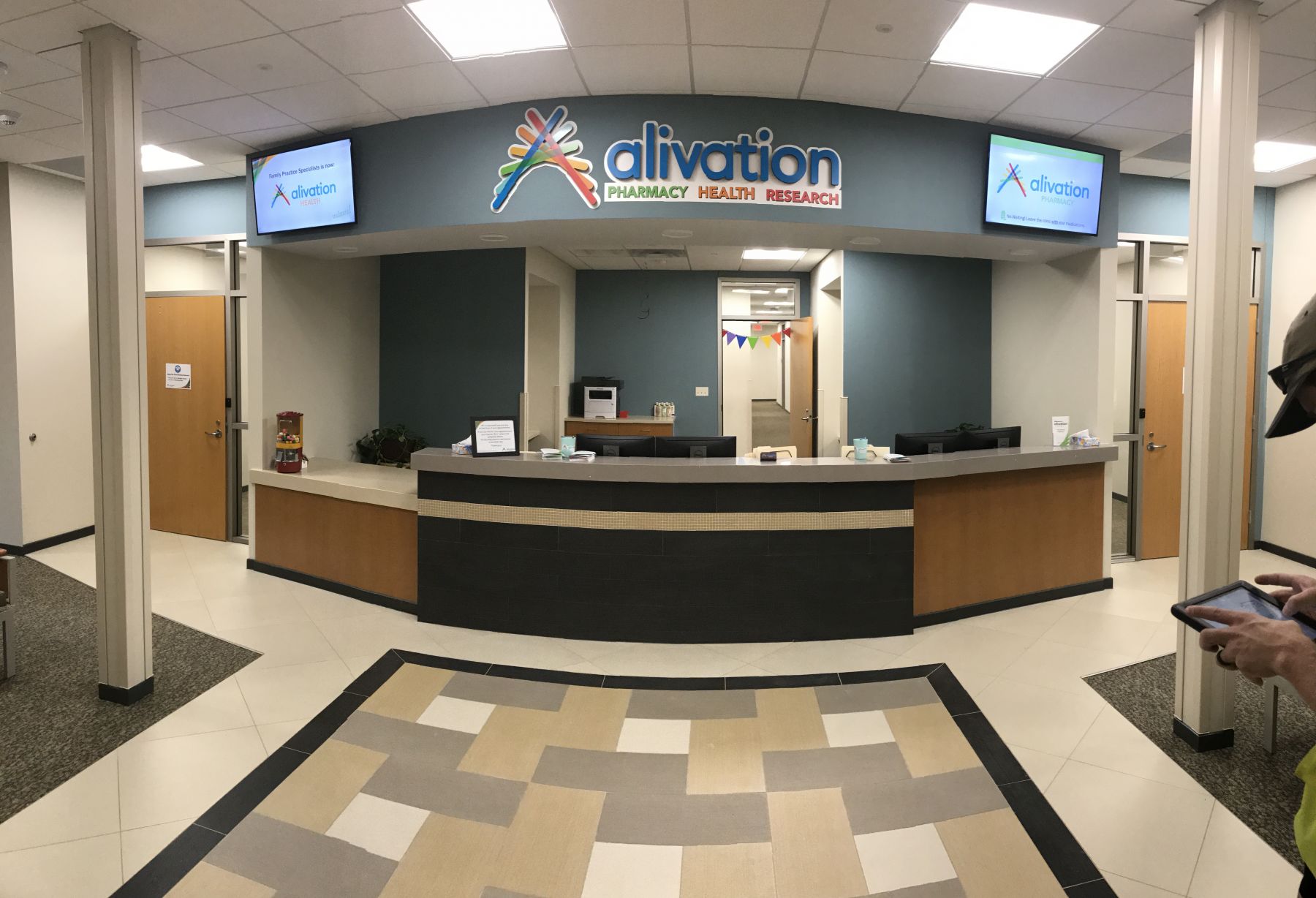 Alivation turned to Hampton Enterprises to help bring its leaders’ vision to reality.

“We’re not here to do the same thing as everybody else,” Chief Information Officer Nate Bird said. “We want to deliver the highest quality to every patient.”

Earlier in the year, Alivation added a neurologist and a pharmacy to complement its existing behavioral health and research teams. The final goal would be the most ambitious — establishing a primary-care clinic in the building’s vacant garden level. Bird remembers that key moment in the organization’s 20-year history.

“To bring on our new primary care team, we had to build out the entire lower level to support them and future business growth,” he said. “We had to go from a concrete floor and bare steel beams to a finished facility, and we had to do it in a short time frame.”

The deadline was clear. The garden level had to be completed, buttoned up and ready for the primary care providers to see their first patients Aug. 14. No fudging.

As they sought bids from local contractors, Bird, along with CEO Trevor Bullock and other leadership team members, quickly determined Hampton Enterprises would move to the top of their list.

“Our team really felt comfortable with Hampton more than anyone,” he said. “There was a relationship we had with people on their team that made us confident they could deliver what they said they could deliver.”

That confidence stemmed from what they knew of the company’s reputation, and what they saw in Project Manager Jeff Nicklas and Site Superintendent Tom Neeman. The confidence grew as they saw the construction team in action. Charged with taking the clean, peaceful, welcoming look and feel of the existing structure and re-creating it on the garden level, Hampton quickly proved more than capable of meeting the challenge, confirming the faith placed in it by Alivation, which prides itself in its teamwork approach and use of world-class technology to address needs of its patients.

Hampton’s construction team took advantage of existing windows to strategically incorporate the open, well-lit feel that already permeated the original facility. They seamlessly meshed with the existing design and color scheme, matching or exceeding build quality of the original structure.

“They absolutely knocked it out of the park. You get a warm, relaxed, confident feeling from those two that if they say it’s going to happen, it’s going to get done and it’s going to be done right the first time. They drive to the goal, regardless of the obstacle. They were amazing at that.”

There were unexpected challenges and roadblocks along the way, but that’s when Hampton’s construction team shone the brightest.

“Any concern that we had, whether it was small or large, was dealt with the same way by Tom and Jeff and the Hampton crew,” Bird said. “If it was important to us, it was important to them. Whether it was something new that we wanted to add or something that came up during construction, they did everything possible to handle whatever we threw at them. They had an amazing attitude the entire time.”

As the clock ticked closer to August, Bird and the team grew increasingly confident with Hampton’s ability to execute on deadline. A reception area, a provider work area, examination rooms, offices, conference rooms and administrative support areas took shape and were finished on schedule, in time for installation of every piece of state-of-the-art equipment required.

“They absolutely knocked it out of the park,” Bird said. “You get a warm, relaxed, confident feeling from those two that if they say it’s going to happen, it’s going to get done and it’s going to be done right the first time. They drive to the goal, regardless of the obstacle. They were amazing at that.”

On Monday morning, Aug. 14, Alivation’s four primary-care providers and their teams started diagnosing and treating patients with a variety of ailments, just as planned.

With its goals met and 15 additional team members on the staff, Alivation provides a “Next Level You” experience for each of its patients, from newborn to elderly.

Hampton’s quality work has helped put the Alivation team in the best possible position to do just that.